It’s finally here, the best (yet) 1-hour TRUCKERDISCO DJ Mix, and it’s been waiting until the final days before this Friday’s Pride Weekend Kickoff event at the Waldorf!

Some Kind Of Music Blog is hosting this one, and they sent me a few short questions to go into their write-up today, but in typical fashion, my answers run a lot longer than people tend to expect, and it’s been a busy day for everyone. They’re all really good questions, so I’ve included my full responses here below, because they get down to a lot of the important basics about what TRUCKERDISCO is really all about. 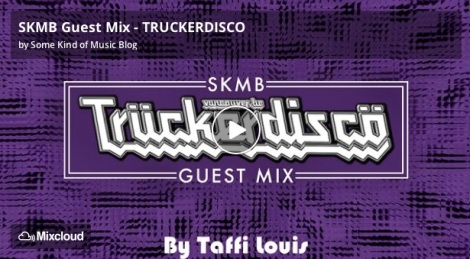 SKMB: When did you start doing Truckerdisco, have you been the one spearheading it the whole time? Whats your goal with the Truckerdisco series, why do you do it?

Truckerdisco will be four years old this Fall. The timing was such that “disco” was seeing the light of day again. I’d been DJ’ing mostly in Vancouver’s gay scene, but I was hearing a lot of that audience wax nostalgic for classic disco, often lament thinking they’d never hear it again in clubs today. Meanwhile, I kept hearing straight friends play sleazy-macho disco by Paul Parker or Skatt Bros on their nights, and I felt a need to narrow that gap.
Several of us DJs had a nu-disco/italo-disco night at Shine for about a year, where I met Woodhead, who threw the word “truckerdisco” into our event postings as though it was some hot, new micro-genre not to be missed out on, and I started doing the same, and it became the name of this event at Anza Club, then a couple months later at The Cobalt, then at Club 23 (now Hindenburg) until its sudden closure, and then Oasis on Davie, some big Pride events at Electric Owl, Heaven’s Door (now XY) off Davie, and this Friday in the Hideaway at the Waldorf. It’s even been to Seattle a few times, at Re-Bar and The Eagle!

That gap I mentioned was originally Truckerdisco’s big make-it-or-break-it wild card. It’s one thing to mix gay & straight crowds successfully … it really depends on the nature of the event. But here, I was deliberately calling for older & younger audiences to gather in the same space. There’s so much history that the older gay audience has with disco – music that was largely made for them, just as AIDS was about to claim so many people. Younger gay crowds don’t often understand the impact that had, let alone straight folks who just like the music. I was prepared for some sort of reaction from straight guys who weren’t comfortable seeing other men dance or show affection in a club. Women also have so much to deal with from other men in clubs, so imagine how a lesbian might feel if some guy bumps into her awkwardly and it’s not immediately clear if what his angle is anyway, etc. Despite all that, Truckerdisco crowds have always been remarkably warm and friendly with each other, and venue staff often say how friendly everyone gets (they even tip better). I think the music, as much as anything, sets that mood and brings out the best in people on these nights. I’m really grateful and proud of that aspect.

Is Truckerdisco a gay event? Absolutely … But not exclusively. It features some of the gayest (but also most bad-ass) dance music ever made, but you know what audience that music’s reaching, mostly? An audience that’s more interested in the music and mostly even gets the gay context, even if it not “about them”.
I see a lot of opportunity for Truckerdisco to poke fun at itself for that, and it shows in some of the visuals and poster graphics. I’m so tired of gay advertisers making assumptions about me, what I’m attracted to, what kind of music I like … and I find the generic gay marketing approach pretty insulting, for the most part. I’d much rather pique people’s curiosity about the event than try than make it some kind of lecture. Ultimately, people come check it out, lighten up and have a great time, and maybe leave with a slightly different idea of “disco” than they came with.

One response to “Hear the latest TRUCKERDISCO DJ Mix, featured by Some Kind Of Music Blog!”